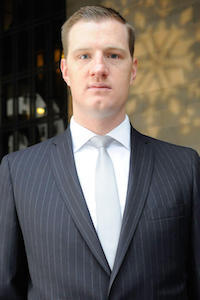 Pittsburgh Criminal Attorney Andrew O. Stiffler is a 2013 graduate of Duquesne University School of Law, where he graduated in the top 25% of his class, and was awarded the Leo J. Loughren Endowed Scholarship. While in law school, Attorney Stiffler was a member of the Appellate Moot Court Board as well as the Louis L. Manderino Honor Society. In both 2011 and 2012, he represented the University in the American Bar Association Arbitration Competition. During the Spring of 2011, Pittsburgh Criminal Attorney Andrew O. Stiffler was awarded the Excellence in Legal Writing Award, an accolade given to the student with the Best Appellate Brief in their respective Legal Writing Class. Prior to law school, Attorney Stiffler earned a Bachelor of Arts in Communication from Villanova University, where he was a member of the Varsity Baseball team, Dean’s List, and Communication Honors Society.

Attorney Stiffler, a Bedford, PA native, prides himself on being a young and energetic practitioner. He has handled numerous cases, both in the Minor Judiciary and the Court of Common Pleas, and has served as an Arbitrator in the 5th Judicial District. Over twenty attorneys, across Western Pennsylvania, have trusted Attorney Stiffler to cover hearings when scheduling conflicts arise.

In 2017, Attorney Stiffler was awarded with the AVVO Client’s Choice Award, as well as the “10 Best” Attorney Nomination for Client Service by the American Institute of Criminal Law Attorneys.

Awards
Contact Us
Practice Areas
Client Reviews
★★★★★
"Mr. Mielnicki recently defended me on my DUI case. He not only got my license suspension wiped away, but he got my DUI charge knocked down to a General Impairment. This is not the first time Mr.Mielnicki has defended me either. When I was younger he defended me on a pretty serious case and got 3 felonies knocked down to misdemeanors. If you want to win, pick Rob Mielnicki." Garrett
★★★★★
"When I was losing patience finally for my girlfriends return home. Something showed me Robert. Robert was there for me and her. Visited her. And walked her through everything. Being very confident with this judge, he was able to successfully lift this detainer. If you ever need a detainer removed or a motion to be filed. I highly recommend him." Robert & Crystale
★★★★★
"On June 26, 2017 Attorney Mielnicki handled a case for us defending our son. He was professional, knowledgable and a highly skilled attorney. He returned calls promptly and always reassured us. The outcome we had hoped for worked out as he assured us it would. We couldn’t be more satisfied. We highly recommend this attorney." Client
★★★★★
"We found Attorney Mielnicki by chance/fate! We are so grateful and pleased how he helped our son with his case. He was attentive and considerate to our questions and informative with answers. We would highly recommend seeking his expertise in criminal law. He will give you the hard facts and do everything he can as an attorney to expedite a final outcome. His costs were reasonalble and his staff is just as attentive to getting answers back to you, as well! He was a great choice for us and our legal situation." Client
★★★★★
"Kept me up to date with the process of it all through Facebook messenger or calling me with the news. I would recommend him to anyone I know. I was sure he was the right attorney for the charges I was facing after the first couple minutes of talking to him." Client
View More
Submit a Law Firm Client Review